Is Corn Bad for You?

The industrialization of corn has had an overall negative long-term effect on the United States which makes us ask is corn bad for us? Corn is being used as an additive in almost all foods we eat in the form of starch, oil, flour, and sweetener. Much of the corn produced also goes to feeding livestock. However, the effects of corn by-products have been shown to have harmful effects on animals as well as the human body.

So, is corn bad for you? Let me explain how it might be negatively affecting your health.

Most corn we eat, we eat indirectly, primarily in the form of high fructose corn syrup. fructose corn syrup was first created in Japan in 1966 (Clark). It traveled to the US and by the 1980s it became half of the sweetener market in America (King Corn). Today, high fructose corn syrup is in many foods that Americans eat like ketchup, salad dressing, soda, cookies, candy, chips, and even added to milk. The reason why corn syrup has become the preferable choice of sweetener is because it is cheap and very accessible. It can easily be transported because it comes in liquid form (Gupta). It is also very addictive, more so than sugar cane and other sweeteners. Is corn bad for you. It might be especially when you consider how it’s being used today. High fructose corn syrup manipulates the chemicals in our bodies to make us crave it the more of it we eat. (Severson). The human body is only meant to take in only nine grams of sugar a day. However, the average American consumes about 60 pounds of sweetener every year—most of which is made from corn (Parker). High fructose corn syrup has helped boost the average American sugar intake by 19% since 1970, causing an increase in obesity. The primary way people get the sugar boost from high fructose corn syrup is through sodas. Most Americans drink at least one soda everyday, which doubles the chance of getting diabetes (King Corn). All of this excessive sweetener can lead to no positive outcome for the future.

Are you still wondering, is corn bad for you?

Corn by-products lead to health risks for millions of Americans and yet it is almost unavoidable to omit them from our diets. If we continue to abuse the crop like this, we will slowly be drowning ourselves in corn syrup. The increase in diabetes and obesity from mass quantities of sweetener increases the chances of heart problems and other diseases and shortens the overall life span of the human race. In moderation, high fructose corn syrup is not bad. However, because food industries put it in so much of the food we eat, it has just become too much for our bodies to handle.

The question, is corn bad for you depends on many factors.

For instance, corn may not only be hurting humans due to an overconsumption of it but it also is affecting our animals.

More than half the corn produced by farmers goes to feeding livestock. Corn is used to feed animals because it is cheap and fattens them up so they can be turned into meat sooner. Corn is very harmful to cows and they cannot survive long on a corn-based diet. However, before we can really see the destructive side of this system, we slaughter them. Fast-food meat is mainly made from cows that eat corn (King Corn).

During difficult economic times, turning to a cheap product like corn may seem like a fine solution to feed the animals that we then feed to ourselves. Many people may not realize or care that corn is very harmful to the health of animals. However, they might show more concern if they knew that it affected their own health too. Because the animals do not digest corn well, their meat is less nutritious and more fatty. In the world we live in today, it is nearly impossible to avoid eating corn in one way or another and, in most cases, it causes a negative effect on our bodies; corn itself is not necessarily bad, but what has become of the industry  has made it a negative impact on America and peoples’ lives. So is corn bad for you? ..you decide.

Editor’s Note: Need more reasons to think twice about piling on the corn at each meal? Read this post Corn is Not a Vegetable. Need some ideas to skip corn, try this tasty recipe.

Moderation is key especially with certain foods. So, here at The Plant-Based Diet, when asked, is corn bad for you? We say, it’s worth keeping it on the low side of your diet. 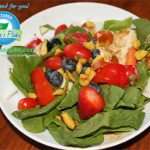 Salad that will Make Your Taste Buds Come Alive 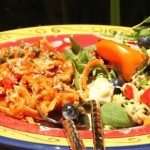