In the mid-nineties, I began hosting a fitness segment on TV called, Keep Fit With Phoebe, that aired for a decade. Back then fitness shows were limited to mostly DVDS like Buns Of Steel. You didn’t have YouTube and Vimeo, where you could get quick tips from fitness buffs, and you certainly didn’t have a TV news anchor wearing spandex and doing exercises in between anchoring the newscast… unless, of course, you were watching my five-minute TV fitness segment.

It wasn’t so much that the news station, or I, was extremely forward-thinking. Rather, the launching of Keep Fit was an effort to fill time and satisfy a passion I had. The station was broadcasting 24/7 over a cable network and aiming to be the local version of CNN.  That meant there was plenty of airtime to fill; thus the five-minute fitness segment  was launched.

The segment became quite popular and made me recognizable for wellness.  But, in reality, at that time, it was only fitness that I knew so well. I hadn’t discovered healthy eating.  Exercise and youth were my way to stay trim. I ate horribly–tons of processed, sugary foods, and soda- pop   drinks.

I don’t know how many calories of junk food I was consuming back then, but new data from

Euormonitor reports that the average global consumer purchases 765 calories each day of packaged food and soda  drinks. And, that figure is  projected  to rise by 90 calories by 2019. Source.

While fitness has always been a passion of mine, my father’s death from prostate cancer caused me to take a closer look at the connection between food and wellness. I learned through my studies with the T. Colin Campbell Foundation in 2010, that eating would play a far greater role in keeping me healthy and fit.   You can read my food story here. Of course, the two together are the dynamic duo that are   key for living well.

Fast forward to 2015, and you have to wonder, with so many vehicles to get fitness, health, and nutrition information with just a click, why we’re fatter than ever.

It’s even worse today. It’s estimated that 2.1 billion people worldwide are overweight or obese. That means they’re at risk of Type 2 diabetes, heart problems, and other costly health ailments, according to The World Health Organization. 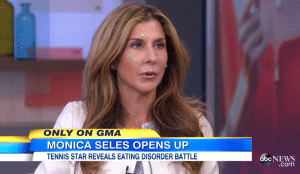 Even star athletes like tennis great, Monica Seles, 41, who has won nine Grand Slam competitions and 53 singles, has battled with food. She told Good Morning America that prior to retiring in 2008, she was a binge-eater and ashamed of her disorder.

An alarming number—millions—of Americans suffer from this. Binge-eating is the consumption of huge amounts of food and usually there is no purging of the food. Seles said she was “out of control” with her eating which she did privately. Her weight fluctuated a lot and she suffered in silence until she was asked to be a bridesmaid in a friend’s wedding. It prompted her to get help from her doctor and to create a healthy eating plan.

Those who aren’t suffering from a disorder like binge-eating, find that poor food choices at their work or school, hectic schedules, and stress are primary causes for weight gain.

But we are seeing more options than ever for healthier choices. However, it’s still slow to take root across the nation. Chipotle and White Castle announced new vegan entrees. They say it’s in response to customer demands.

There’s growing interest in plant-based eating even if it’s not a completely vegan diet. Washington and the United Nations are promoting the plant-based diet as a way to reduce healthcare costs and save the environment. U.S. News and World Reports ranked the mediterranean diet third on its list for healthy diets. Paleo was ranked dead last.

With more plant-based options coming on the food scene and even more celebrities embracing a vegetarian or vegan diet, maybe the battle of the bulge will start to shrink.  What’s really needed is for American to follow a mostly whole-food, plant-based diet. Remove the junk-food snacking and over-consumption of manufactured and processed foods and replace them with food that’s grown locally and organically.

However, if fast food chains pour out manufactured meals stuffed with chemicals and highly-processed ingredients, the bulge is likely to swell. 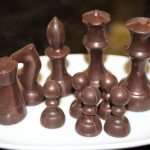 Is Chocolate Good For You?