Pumpkins, More than just for the Holidays

A pumpkin pie, wrapped in a warm buttery crust, brightens the long, darker days of winter as this attractive dessert graces the holiday table. Prior to big holiday meals, pumpkins first make their appearance at the end of October, a sign of the rewards from the fall harvest, and become ornamental displays carved into haunting images by creative hands. 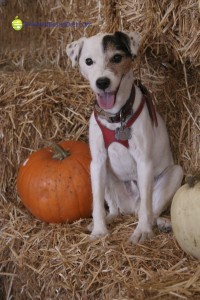 For most of the year, pumpkins disappear from minds, recipes, and tables, appearing more of an afterthought at the end of the year rather than an ingredient that can be used year-round. The healthy benefits of pumpkin is reason enough to keep this fruit in the kitchen from January to December. Of course, finding pumpkins might be somewhat difficult to find but, most certainly, this time of year, pumpkins are abundant.

In the same family as butternut, spaghetti, and acorn squashes, pumpkin is a winter squash that can be cooked in pies, soups, chocolate pudding, Mexican meals, smoothies, and as a replacement for oil in recipes. Pumpkin seeds can be roasted in the oven with salt, spiced with cayenne pepper, or sweetened with nutmeg and allspice. The shell of a pumpkin can be used as serving trays for special occasions like a holiday meal.

A pumpkin’s versatility is magnified by the rich nutrients in this gourd. Jess Kelly, an MNT and owner of Durango Nutrition that provides whole foods-based nutrition therapy in Durango, Colorado, states that along with Vitamins A and C, a pumpkin’s distinct orange color indicates high amounts of carotenoids like zeaxanthin and lutein, which are both beneficial to eye health.

Kelly reminds that carbohydrates in pumpkins, known as polysaccharides, specifically pectins, are in most winter squash and are a more healthy alternative than carbohydrates found in other foods. Kelly explains, “An increasing number of animal studies are showing that theses starch-related components in winter squash may have antioxidants, anti-inflammatory, as well as anti-diabetic and insulin-regulating properties.” For those wanting to give their gastrointestinal tract, prostate health, and immune system a boost, Kelly recommends pumpkin seeds which are high in zinc.

Along with consuming the numerous beneficial qualities of pumpkin, the body’s biggest organ can also gain value when pumpkin is applied to the skin. A pumpkin face mask rejuvenates the skin with Vitamins A and C and zinc, maintaining healthy skin while also correcting and repairing skin tissue. 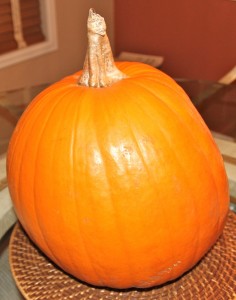 Pure pumpkin puree can be bought at the grocery store whatever the season. Pumpkins that decorated the house and lawn can also be

saved if they were not cut into to supply several months’ worth of pumpkin. An easy way to prepare pumpkin from house ornaments into a healthy edible ingredient is to cut slits into the pumpkin, and then place the whole pumpkin into an oven at 350 degrees for one hour. This process has been tested so don’t worry about an exploding pumpkin in the oven.

Once the pumpkin has cooled, cutting into the gourd will be much easier. The strings and seeds should be removed first and separated later so that a healthy pumpkin seed snack can be made and enjoyed. Cutting the flesh from the rind will be a less strenuous task with an oven-softened pumpkin. Puree the pumpkin flesh and store in airtight containers in the freezer. Pumpkin can be stored in the freezer for three months plus.

With so many healthy qualities, as much as possible of the pumpkin should be saved. By not letting this valuable winter squash go to waste, you can receive health benefits from it all year long. 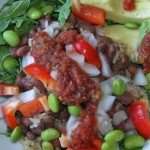 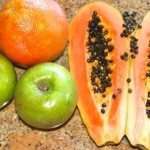 Got Good Health? It’s found in whole foods, not the individual nutrients!