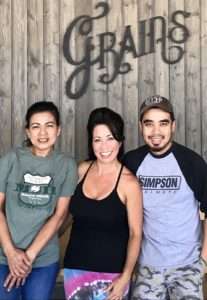 If you’re vegan, gluten-free and searching for some of the best plant-based food in San Diego, I have the restaurant for you.

It’s called Grains. More about it in just a few but first a little background about why this restaurant is such a good find and so unique.

When I was growing up in San Diego, very few people knew what Thai food was. In fact, many people were confused when I told them I was from Thailand. They’d ask me, “Are you Taiwanese?”

Today, of course, it’s a different world. There are lots of Thai restaurants nationwide and Thailand is a top place to visit for many people around the world; see my post and photos from my visit. What surprised and pleased me, though, is the opening of gluten-free and vegan Thai restaurants.

Grains restaurant on Adam Street in San Diego, California opened originally as a gluten-free, vegan Thai food restaurant. Since, I lasted visited it’s evolved and there’s so many options on the menu. I’m happy to still see a strong Thai influence and even a favorite of mine, yellow curry on the menu. But, should you want something other than Thai food, you’ll find plenty of options.

Another thing that you didn’t hear much about was gluten. I started writing about gluten nearly 15 years ago. At that time, people had no idea what gluten was and most thought it was a joke.

How could anyone be allergic or food sensitive to bread?

Of course, today we know it’s very possible and gluten isn’t just in bread. It’s in lots of unsuspected food items from salad dressings to desserts and even in everyday household items like some kinds of toothpaste.

Avoiding gluten is tough to do. But fortunately, a lot has changed in more than a decade. Today, gluten-free is a common term, so much so that there are plenty of spoofs done on “eating gluten-free.”  But for those who must avoid the protein, it’s no joke.

I went gluten-free in the mid-2000s and then stopped because I thought I could handle eating it again. However, it gradually compromised my health and I believe it contributed to my developing subacute thyroiditis; read more here.

I’ve since turned my diet around and now eat very limited gluten or casein (a protein found in dairy). My health is improving as a result and I’m feeling better than I’ve felt in years.

However, for a while, I was eating vegan-only at home because, even though there are more gluten-free options than ever before, I still had trouble locating restaurants that offered some of my favorite plant-based foods.

When I discovered Grains I was pleasantly surprised. Interestingly, despite its name, it is a gluten-free Thai restaurant. Now, this I had to try and I’m so glad did.

I started with a favorite soup, Tom Kah, from Thailand. This soup is creamy from the coconut milk; yet it’s completely vegan–no dairy, meat products, and no gluten. What I love about this soup and the other dishes that I’m going to share with you is that they’re also not loaded with sugar or salt.

In Thailand and in traditional Thai cooking, while some dishes may have a sweetness, they’re not heavy on the sugar. But here in the U.S. where sugar is in just about everything –Americans consume, on average, 152 pounds of sugar per year–the Thai recipes are modified to match our voracious desire for sweetness. I personally prefer savory over sweet. This soup has a bit of both, which is what makes it an irresistible soup. Try it and I’m certain you’ll fall in love with it.

Next up–an appetizer that is remarkably close to calamari, yet it’s completely vegan and gluten-free. There are a few items on the menu that aren’t gluten-free, so if you’re following a gluten-free diet or you have an allergy, be sure to ask before you order.

As I got to talking with the owners, a sister-brother team, I learned they knew my dad, Serm Chongchua.  My dad was one of the first Thai people to come to the U.S. and remain here after he left his position at the Thai Embassy. Knowing very little English, he worked hard and eventually landed a drafting job and worked his way up to certification as a design engineer.

He became a U.S.citizen, but all along he kept his Thai roots and I grew up in a home that was always filled with Thai people, Thai cooking, Thai music, Thai dancing, and lots of shoes at the front door!

It’s interesting to think about how my dad would’ve reacted to all the Thai restaurants that have opened up–and, now, Grains–a gluten-free, plant-based food option.  Surely he’d be amazed.

Today, I carry on the tradition of making one of my dad’s most coveted Thai dishes, yellow curry. This was ever-popular, especially at the New Year’s parties my dad hosted at our home.

He typically made two pots of the yellow curry–one very spicy for Thai people and the other toned down for the American guests.  🙂 Personally, I prefer a little less spice. You can try making it yourself. Here’s my yellow curry recipe.

By far one of my other favorite Thai dishes is called Larb Tofu. It’s traditionally made with duck or chicken; however, at Grains, it’s a vegan dish made from tofu and you’re not missing a thing. The garlic, lime, chili, mint flavor is so intoxicating!  It’s served with a wedge of cabbage leaves much like how PF Chang’s serves its lettuce wraps. But I think this is so much tastier. Mixed in are red onions and chopped mint leaves. Again, it’s savory instead of super sweet. I LOVE this dish. Go and order it. You’ll thank me later.

For dessert, one of my all-time faves, mango with coconut sticky rice. It’s a delicious treat that doesn’t leave you filling bloated and heavy the way so many other desserts do. Sorry, the picture was snapped but not fast enough, my mom and I already got busy eating it! Another nice treat if you want something light to finish off your meal is the Thai Iced Tea or Thai Iced Coffee made with non-dairy milk. Delicious!

If you go, let me know what you think in the comments below! 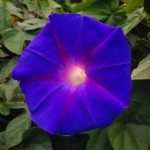 How Worry Destroys Your Life And What To Do About It